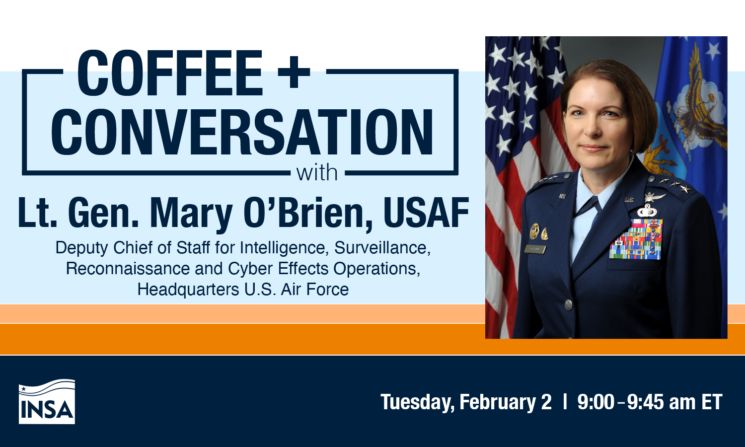 Find out what's on the horizon for the Air Force during this Coffee & Conversation program with Lt. Gen. Mary O'Brien,Deputy Chief of Staff for Intelligence, Surveillance, Reconnaissance, and Cyber Effects Operations, Headquarters U.S. Air Force.

The moderated conversation, taking place on Tuesday, February 2 from 9:00-9:45 am ET, will identify some of the challenges the Air Force anticipates in the coming year and how it is adjusting its mission priorities accordingly. Lt. Gen. O'Brien will also articulate her expectations for the Air Force's industry partners.

Lt. Gen. Mary O'Brien is the Deputy Chief of Staff for Intelligence, Surveillance, Reconnaissance, and Cyber Effects Operations, Headquarters U.S. Air Force. She is responsible to the Secretary and Chief of Staff of the Air Force for policy formulation, planning, evaluation, oversight, and leadership of Air Force intelligence, surveillance, reconnaissance, and cyber effects operations capabilities. Lt. Gen. O'Brien received her commission upon graduation from the U.S. Air Force Academy. Since, she has served in a variety of intelligence command and staff assignments, including 22nd Intelligence Squadron; 691st ISR Group; and 70th ISR Wing. Lt. Gen. O'Brien has held leadership positions as the Joint Staff for the Office of the Secretary of the Air Force Space Command and as the U.S. Cyber Command Director of Intelligence, among other roles.

Advanced registration is required. Closed captioning will be available for this event.